The Annual General Meeting for Ballarat Memorial Sports Bowling Club was held on Wednesday, April 14. It was great to see a large number of members in attendance. The outcomes of the meeting can be read below.

Kevin McLean was re-elected for a further term as Club President.

Kevin was also awarded by the Club with Life membership. Life member Ross Jones informed the meeting of Kevin’s achievements and contributions to the Club over many years of service, along with a story or two.

Craig Hurdsfield is now the Club’s Vice President. Welcome back Craig and we look forward to a great year ahead with building construction set to get underway later in the year.

The two vacant positions on the Management Committee will be dealt with by the Committee with no nominations having been received earlier.

With no nominations having been received at close of nominations for the five positions on the Saturday Match Committee, these will now consider by the Management Committee on how best to fill these positions.

The coming season’s membership fees will be:

·         Fee of $5 per game for players playing in a second Pennant competition (ie. For some Tuesday Pennant), to be billed at the end of the season

After discussion and consideration the meeting resolved to continue the naming of the Club’s best and fairest Saturday Pennant award to remain the same. It was interesting to learn a little history of the men at last night’s meeting. The similar award for Tuesday Pennant was a couple of years ago named in honour of our Club’s Life member, Dot McGregor.

LIGHTING OF THE “CITY” SOUTHERN GREEN

The meeting discussed the possibility of installing lights of the “City” Southern Green. An estimate cost for the proposal was $34,000. Such a project could be considered following the completion of the new Clubhouse and resurfacing of the carpet on the “SMBC” northern green which we anticipate will be undertaken in the new financial year.

It was with sadness that we learnt that former member, Cyril Bainbridge has just passed away. Our sympathy to Ros and family on their sad loss. 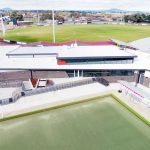